Why Isn't It Abuse When The H$U$ does it? 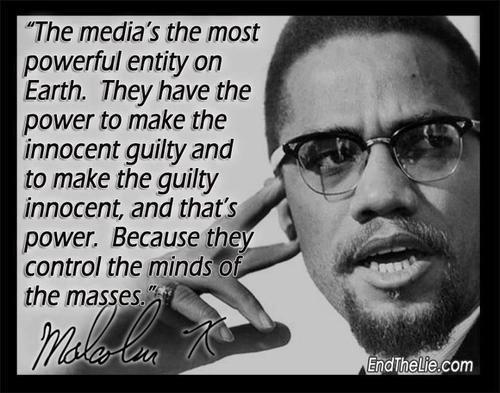 The media has been against Tina from the very beginning, ever since the H$US released pictures and their narrative, the media has fallen for everything they have been told. Most people reading about Tina blindly accepted that the media and H$U$ were telling the truth because in this day and age if it’s on the Google or FaceSpace it’s true! Today we are going to look at how easily the H$U$ deceives people.

It's been awfully hot and humid out the last few days so I've been spending my time inside, under the AC. I’ve been going picture by picture through every picture the Humane Society of the United States took at Tina's house the day of her raid. I have seen them before but it's been a while, so I really wanted to refresh my memory after the final sentencing. The first picture I came across shows how deeply the H$U$ loves dogs. 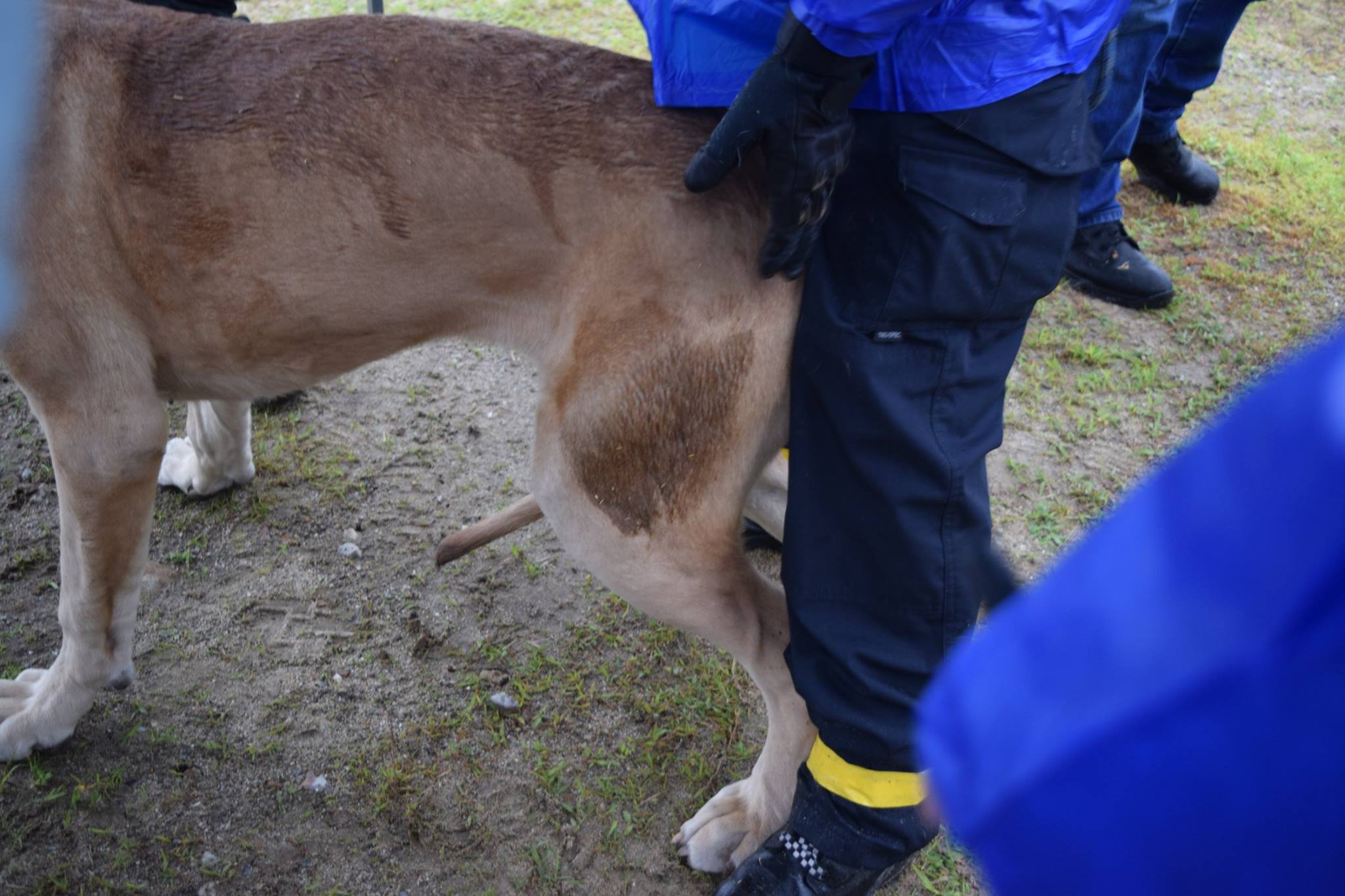 It's interesting to really look at the photos because there's so many details that I noticed as a dog person. Toys everywhere, dogs hanging out, and muddy kennels. It could have been anyone of my breeder friend’s homes on a rainy summer morning. The mud was simply because it was raining the day of the raid and the dogs that were out in it were out voluntarily. They did have places to go inside to get out of the rain if they chose. The inside kennels, some obviously in the middle of being cleaned, some with fresh shavings, were available to the dogs. There were plenty of clean, unopened shavings there as well. Now, I have no intention of lying or writing any half-truths. There are some pictures that really don't look good, which I expected. I mean, it’s really looking like Marilyn Kelly was definitely a plant and Annie Rose Newell, the teen who “worked” for one day was a naive pawn. I don’t blame Annie Newell at all for being easily led by others. From what I am told she is a very nice, shy young woman, and like any other older teen she wanted to be a part of something and was easily manipulated. Tina had very little help for the month leading up to the raid, even though she thought she did. Someone close to Tina messaged the FB page recently and told us they thought that with Tina being in as much pain as she was with her knee, that Tina couldn’t get around well enough to check everything on a daily basis. I have run businesses my entire life and sometimes when I am sick, I must trust that the people who work for me are actually doing their job. Tina had an injury and had to trust that Marilyn was doing her job, which she obviously wasn’t. Why didn’t Marilyn ask for help from people volunteering at Conway Area Humane Society? If she cared about the dogs, she would have sought legitimate help. Of course she wasn’t there to help and really doesn’t care about the dogs at all.

The blame isn’t all on one person though. I know there were people who call themselves Tina’s friends who were in and out of Tina’s house in May, yet did nothing to help, but that’s a blog for a different day.

You know who had enough volunteers and staff to make sure all the dogs were taken care of 100% every day? The H$U$, that’s who, but as you will see in the following photos (The H$U$’s own) that they didn’t bother to hold themselves to the same standard they were trying to hold Tina to. Because when a breeder does something it is abuse, yet when the H$U$ does worse it's because they care. 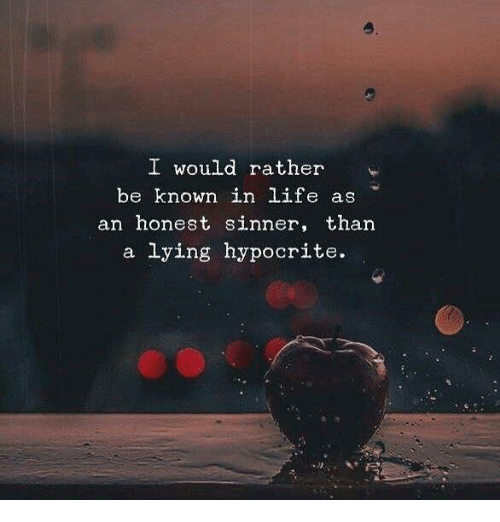 Obviously the Humane Society of the United States does not follow that tenet in the slightest. As you will see here there are dogs that looked in much healthier condition before the H$U$ got their hands on them. I picked the easiest pictures to see injuries etc that happened in the “care” of the H$U$ employees even under the watchful eye of 2 vets, Dr. Sarah Proctor and Dr. Monique Kramer.

In this picture you can see clearly that the dogs “Happy Tail” was healing. There’s no open wound and hair is starting to come back. 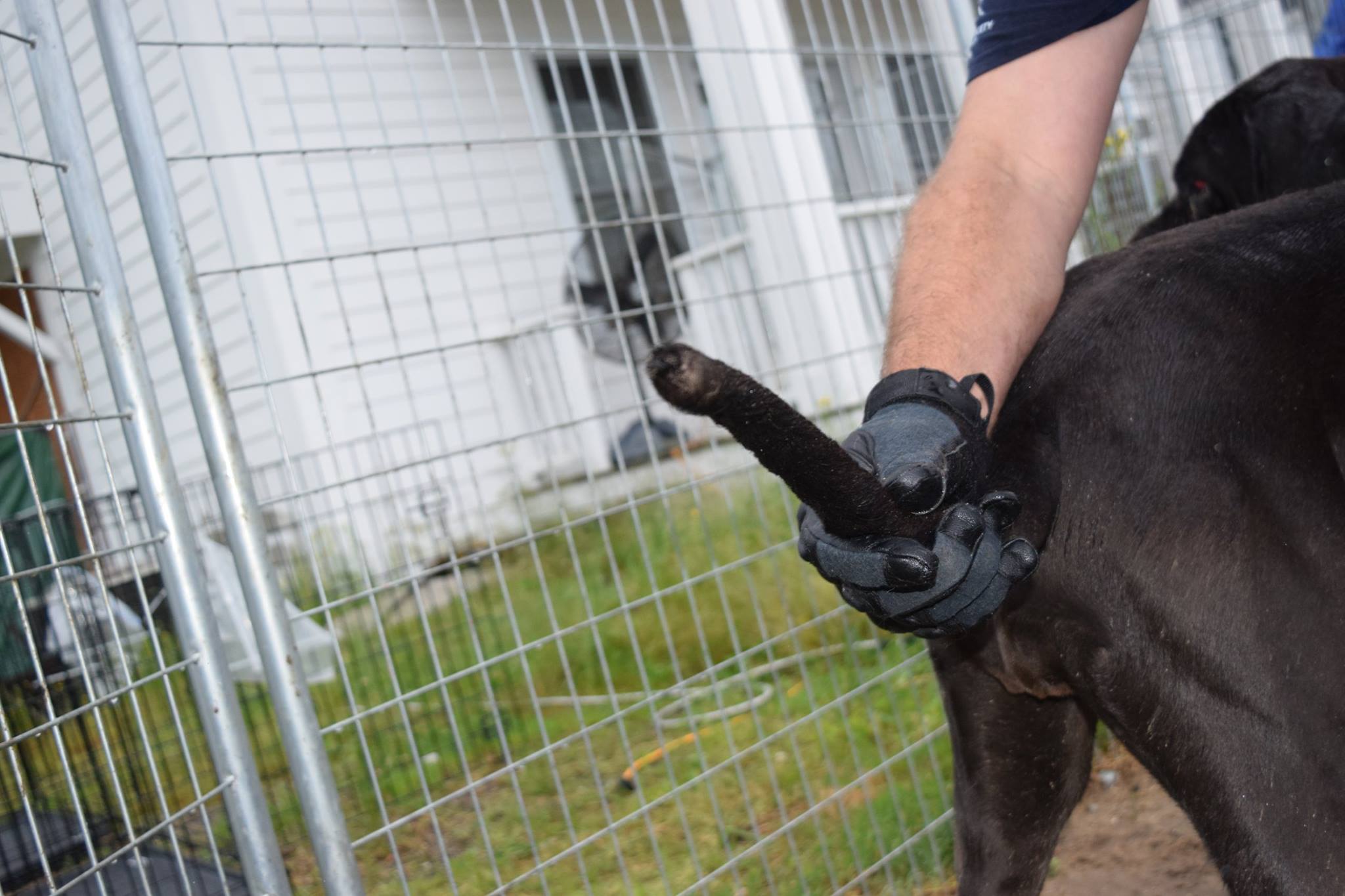 In this picture, after being in the care of the H$U$ for two days the end of the tail is split open, bleeding and the hair is starting to fall out. 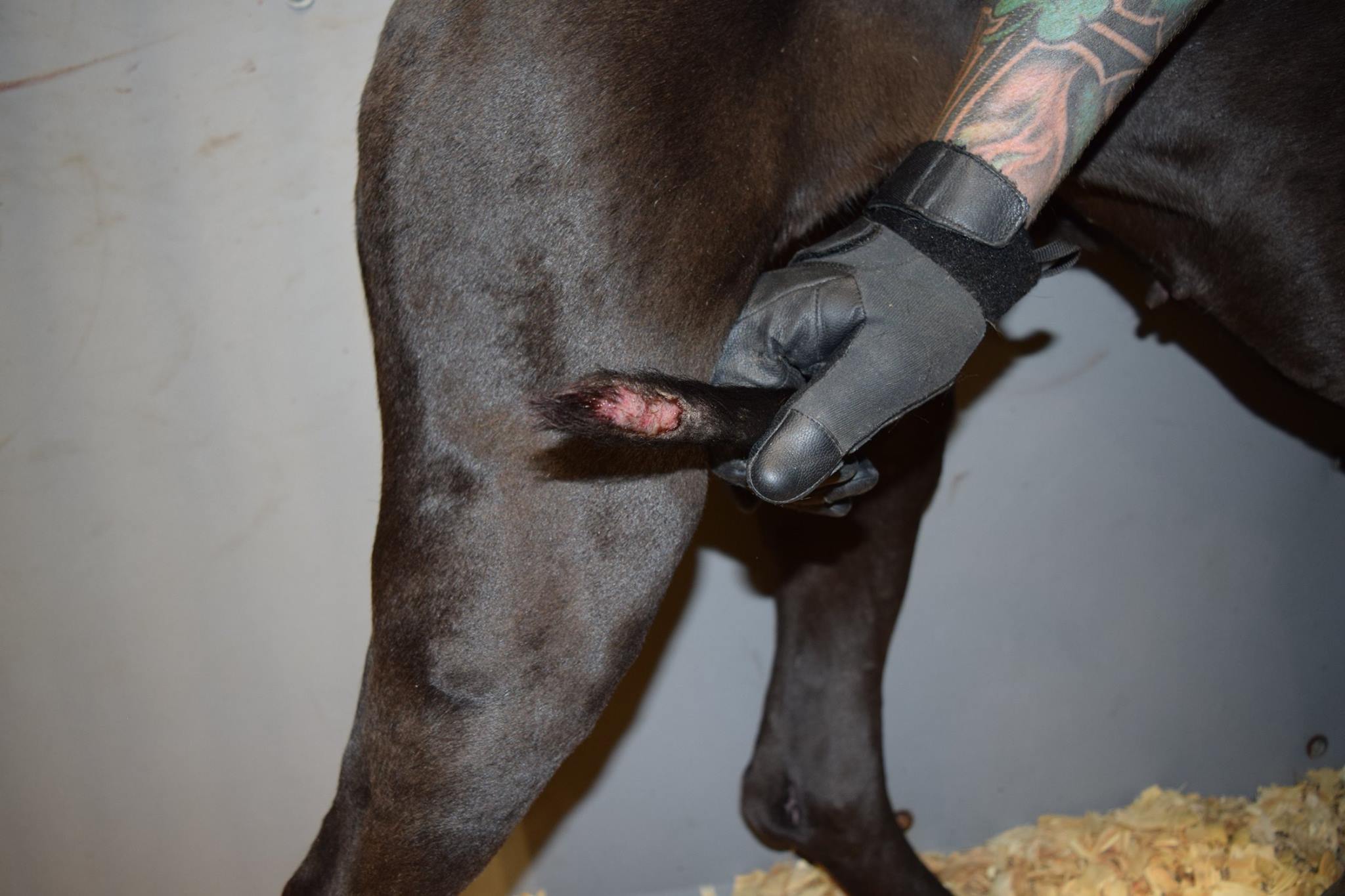 In this picture you can see blood on the wall from the dog’s tail, just like they said happened at Tina’s home. The incredible hypocrisy exhibited here is nothing short of spectacular. It’s a fact that as Tina was taken away she was still trying to get the H$U$ people to listen to here about medicine for the dogs. Did the H$U$ wait to give medicine until after they took pictures in the warehouse? Did they even bother to listen? Note the date is 6/18/17 two days after the raid. 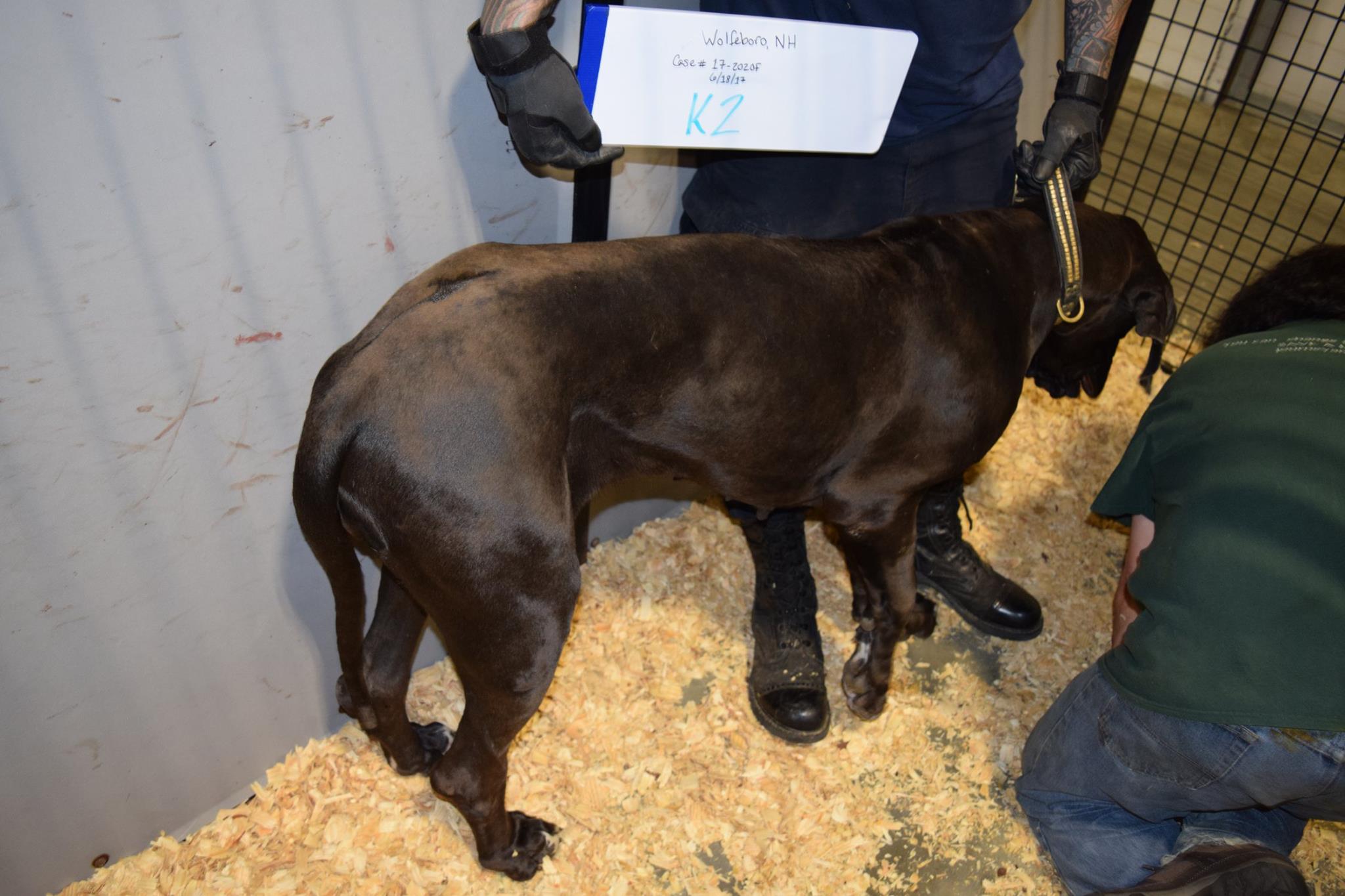 This is a dog who’s pictures really got me. While taking pictures at Tina’s you can see no blood on the dog. Once in the crate, well… See for yourselves. 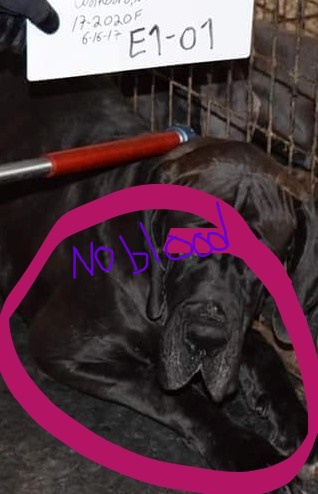 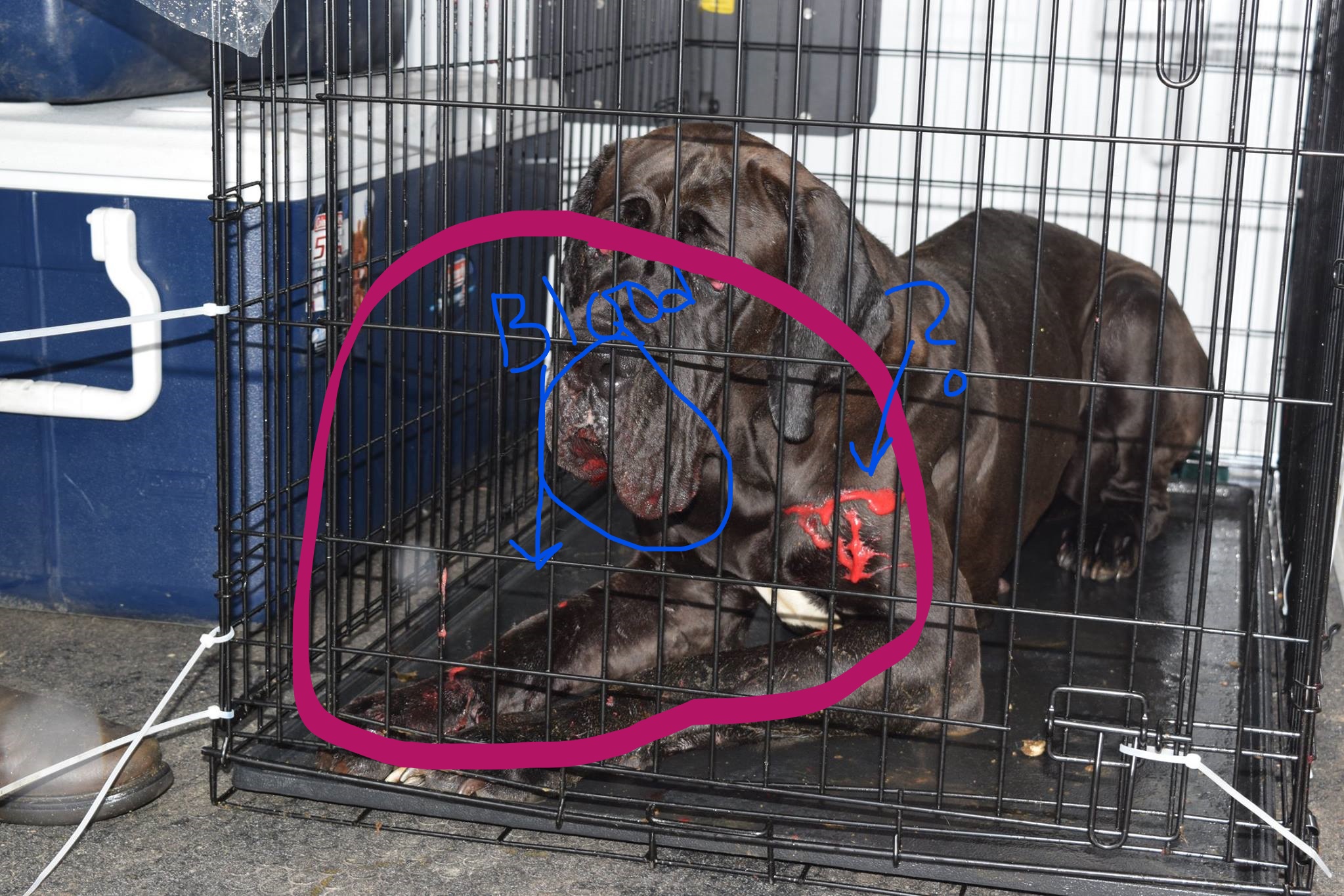 I can’t write about this much more, my blood pressure is beyond sky high but here’s one more comparison. The puppy’s eyes are fine in this picture, probably because either it was totally healthy, or the infection was being treated. 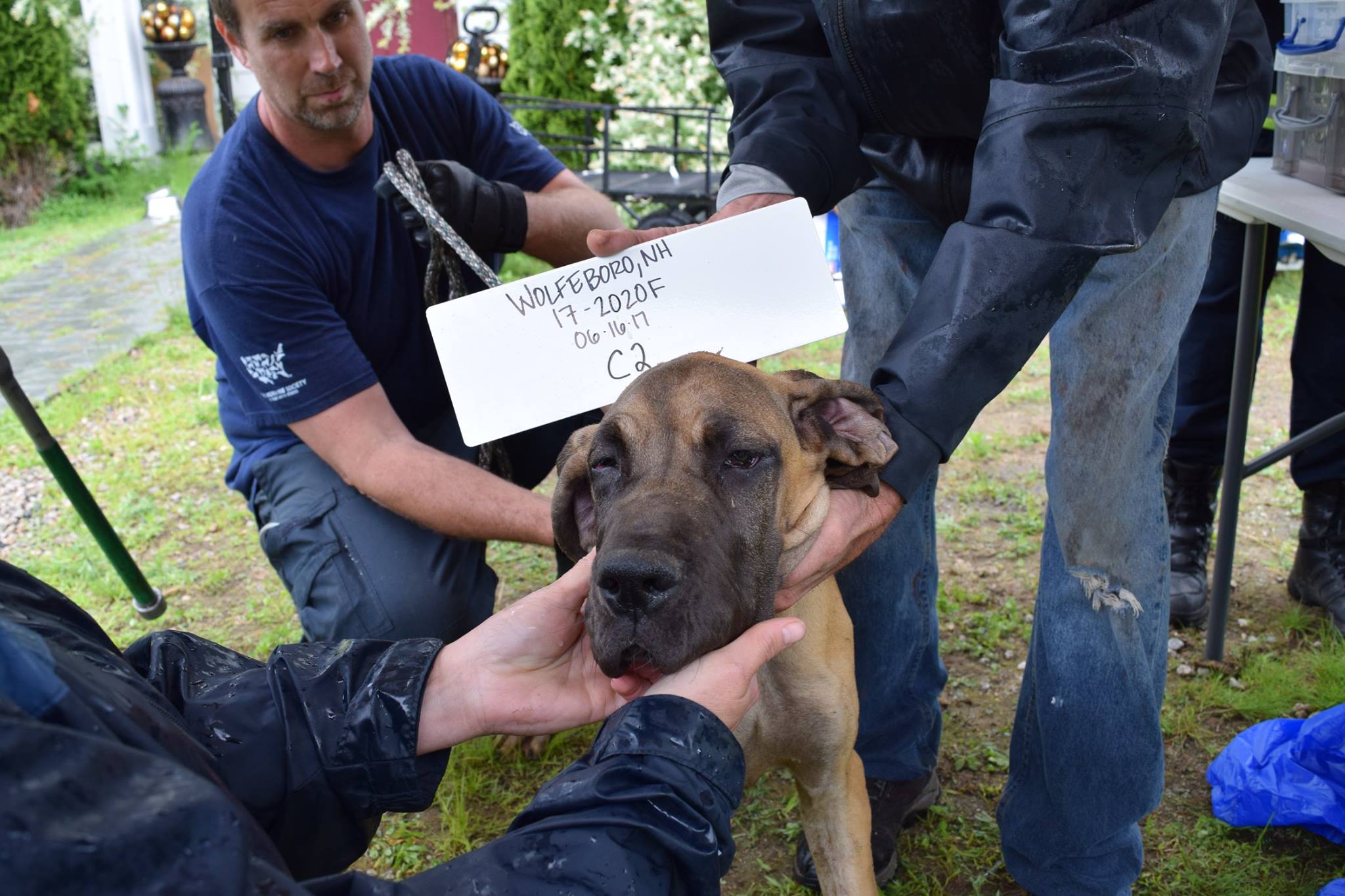 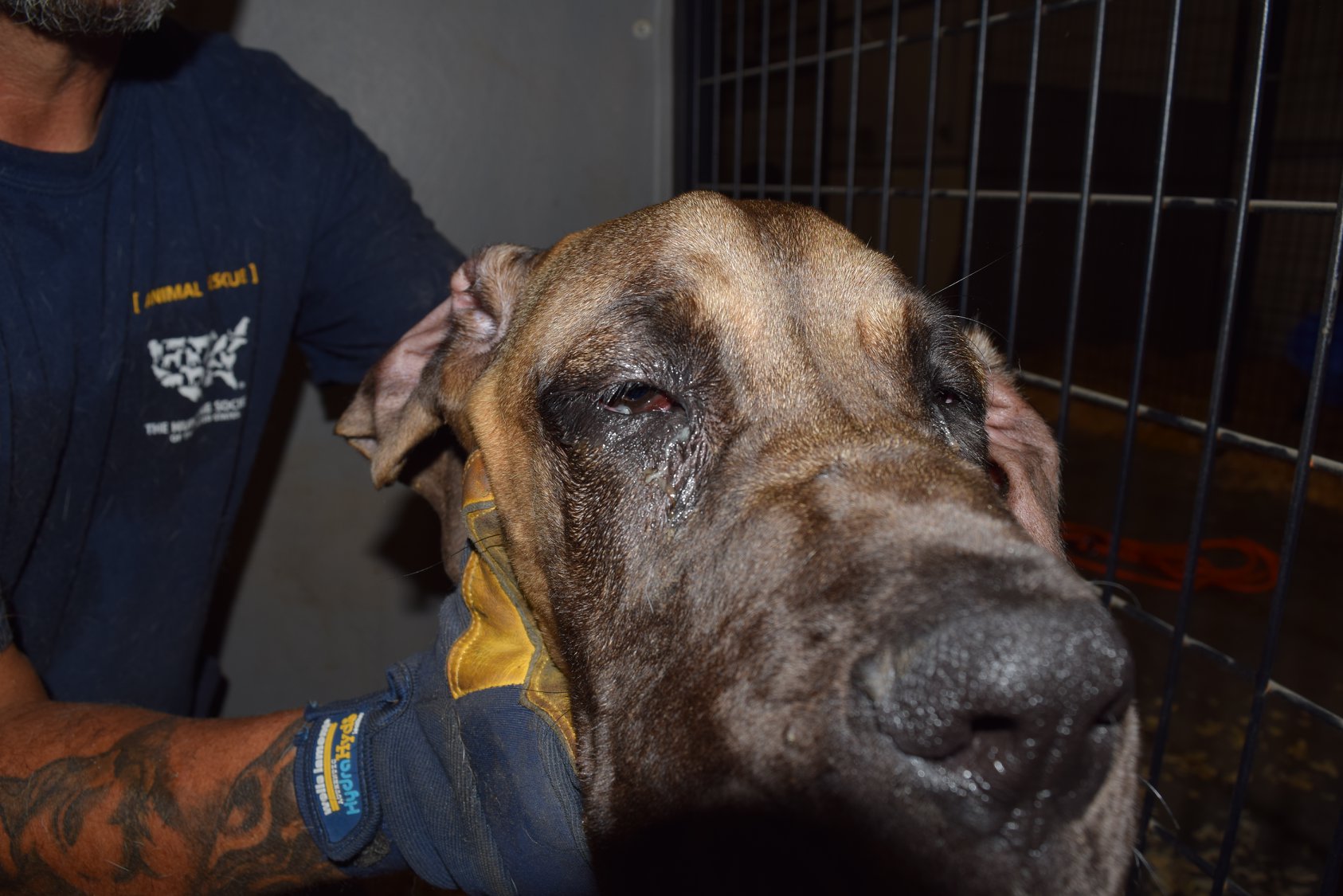 Then there was this gem of an evidence photo taken on 6/18/17. Yes, it’s a tick. Oh no, not a tick, in New England in the late spring!!! It’s not only a tick, it’s a tick that has NOT been attached for two days feeding on blood. It’s probably something brought in by a volunteer or staff member. Yet H$U$ used it as evidence of neglect. W.T.F? 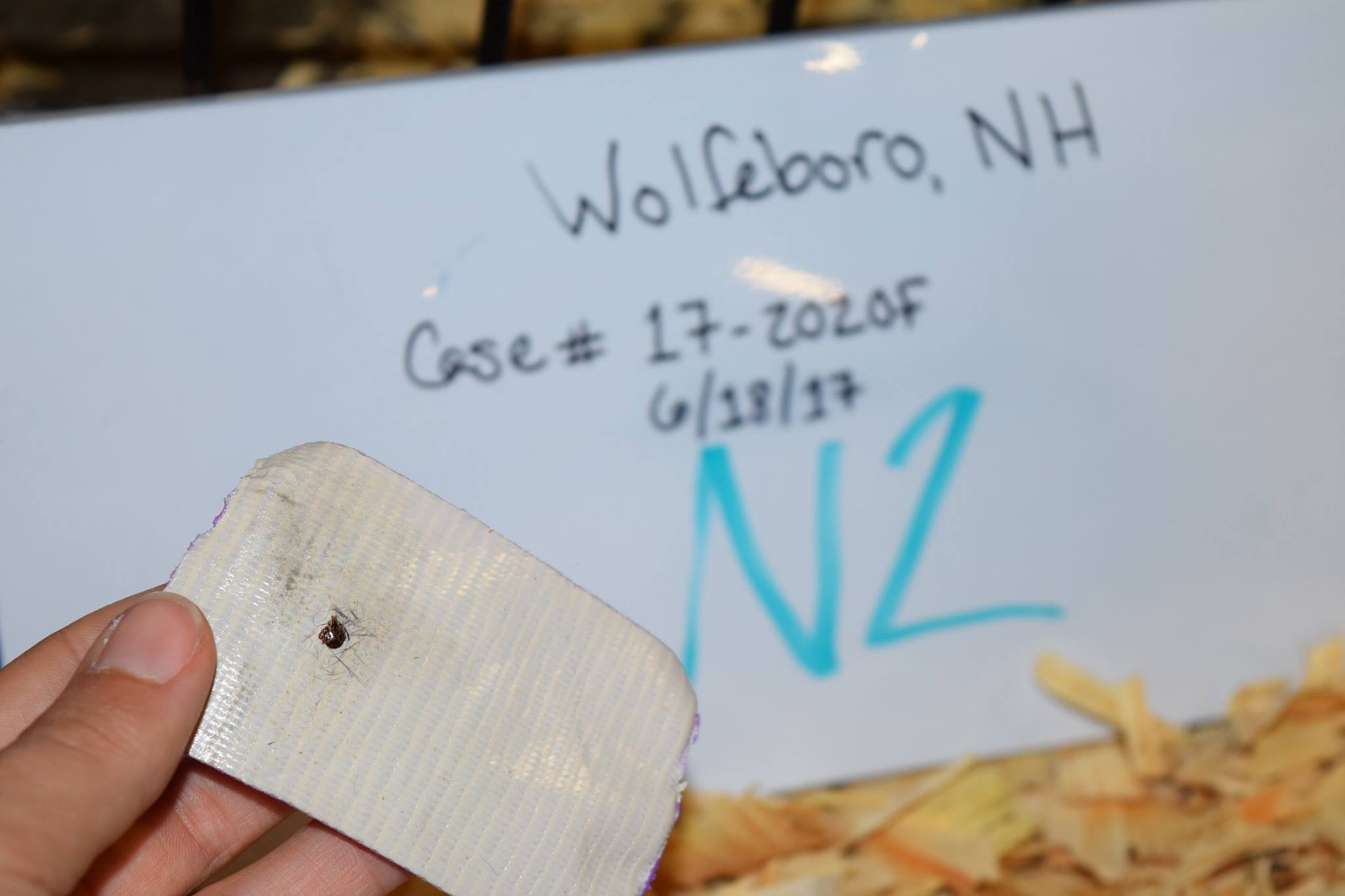 This really, really bothers me. Like beyond all reason. What pictures was the jury shown of these three dogs? How about the media? I am willing to bet they were not allowed to see that these dogs and others deteriorated after being with the H$U$ for just a day or two.